Okay, okay, so I’m a little behind the times.  “Welcome to the nineties, dude!”, as a friend of mine would say.  I can’t help it – I’m the one who thinks this whole Interweb thing is just a fad. 🙂

Anyway, I’m working with a new laptop (Dell Latitude D830) that, apart from being the size of a dining room table, has some reasonably good specs.  The key thing about the D830 is that it has a 64-bit chipset.  This means that, although the operating system is the 32-bit version of Windows XP, I have the ability to run 64-bit VMWare Virtual Machine guests.  Getting the system to the point where I could fire up a 64-bit guest took a while, so I thought I would share my experiences here.

The first step is to determine whether your host machine hardware is capable of running 64-bit guests.  There are two methods I came across for doing this.

The tool itself is tiny and gives a minimalist output when successful, as shown in the screenshot below.

CPU-Z is a handy little freeware utility from http://www.cpuid.com/cpuz.php and provides information on some of the main devices of your system.  More importantly, it provides detailed information relating to your processor. 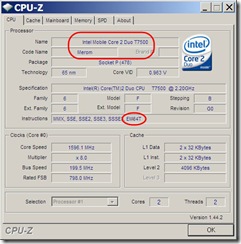 In my case it tells me that my processor is an Intel Mobile Core Duo T7500 (codename “Merom”).  The EM64T (Extended Memory 64 Technology) tag is important in that it indicates that the CPU is based on Intel’s 64-bit technology.  EM64T was the original name and has now been superseded by the term “Intel 64”.

Armed with the processor information from Method 2, I then used Google to try to confirm whether the model supports Virtualization Technology (VT).  Some CPU models that are based on EM64T architecture (like the one in my home PC!) are not VT-capable, which means that they do not support virtual machines as guests.  The best information I found was, curiously enough, on Wikipedia.   The page covering the “List of Intel Core 2 Microprocessors”  quickly gave me the information I was looking for.  Regarding my “merom” CPU it had this to say:

Given that my model is T7500 it all looked very promising!

The next step was to check that the VT was enabled in my laptop’s BIOS.  For some bizarre reason known only to hardware manufacturers VT is typically disabled by default.  The BIOS settings obviously vary according to the manufacturer and model. For my Dell Latitude D830 the VT setting is located in the “POST Behavior” section under “Virtualization”.  POST stands for Power-on Self-Test – essentially the computer’s pre-boot sequence. As suspected, virtualization support was disabled in line with the factory default settings.

With VT was enabled in the BIOS it was all plain sailing and I am watching my Windows Server 2008 x64 guest machine run through the setup routine as I type.  The next step will be to install the 64-bit version of Exchange Server 2007 – something I have been unable to do in the lab until now.  🙂